The club originally met fortnightly and membership was 2/6, but this soon became 5/- with weekly meetings. Early activities included a club tournament, a lightning tournament, friendlies and visits by the late B.H. Wood, who gave simultaneous displays and lectures. Club sets and boards were not purchased until 1948!

In 1960, Mr. Gordon Mills (now with Chipping Campden) offered to give a simultaneous display, with a contribution to club funds of 5/- for each loss and 2/6 for each draw. He was relieved of £1-12-6d for his troubles, and thanked accordingly!! By 1963 the 1st team was in Division 3 of the BDCL and the 2nd team was in Division 6 out of 7. A Mr. R.C.Reynolds (No relation, honest) took over as Secretary. In 1966, he was succeeded by Graham Lightfoot, who proposed that 3 teams be entered to the league. A surplus in funds was recorded for the first time. The first club clock was purchased in 1967. 1968 saw all 3 teams promoted.

In 1972, the club moved from the Churchill Club, to the New Inns, Acocks Green. The first Summer Tournament was held in that year. The club moved again in 1974 to Archbishop Ilsley School. Divisions 1-5 in the BDCL were increased to 8 boards in 1976. Kevin Yeomans became U-14 Warwickshire Champion and Mark Saunders became Secretary. The club moved to Victoria Road in 1979 and was then able to open on Tuesdays and Fridays.

The Tamworth Trader Trophy was won in 1980, resulting in the scary photograph below: 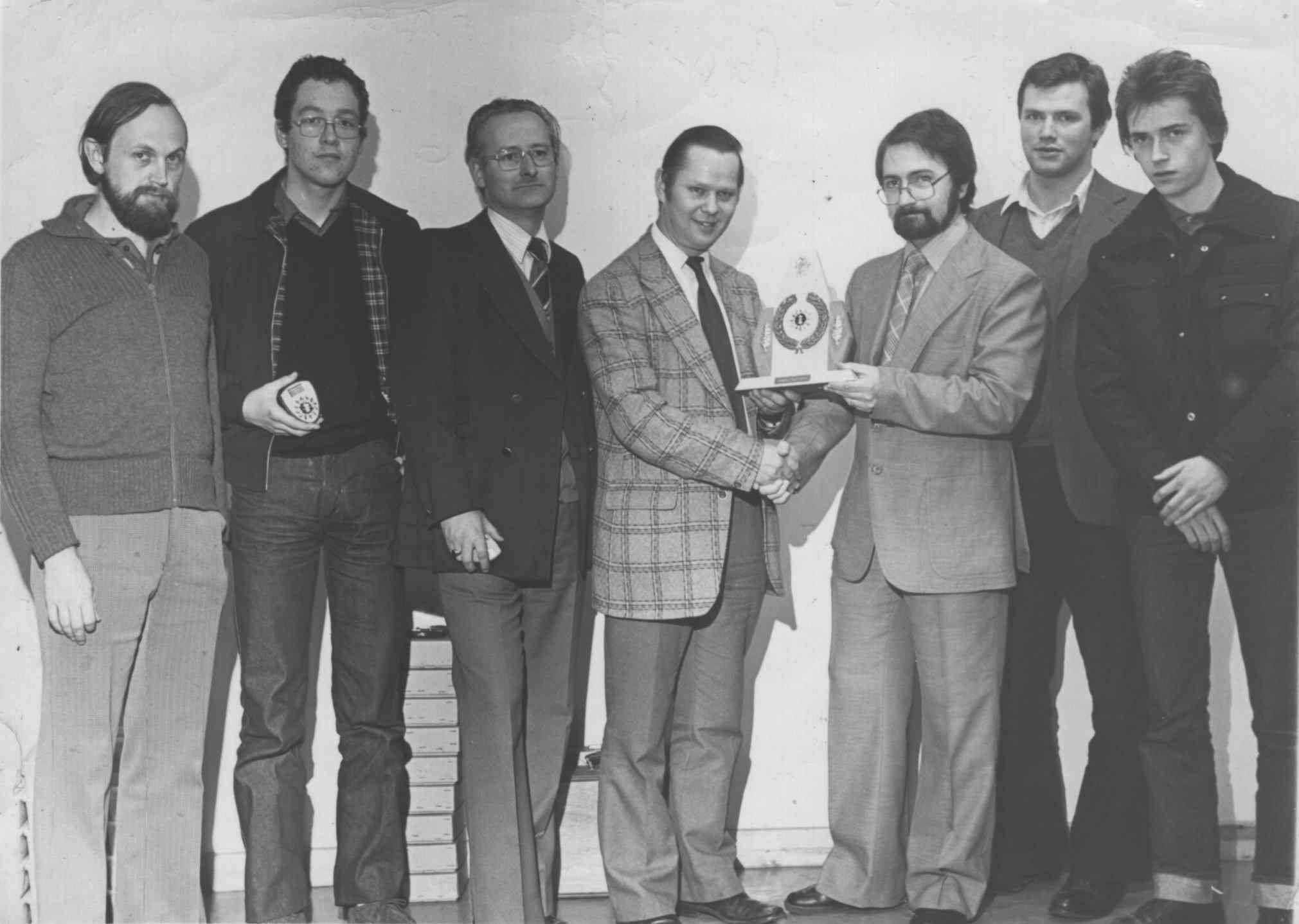 From left: Geoff Howard, Glen Davies, John Llewelyn & Dave Brown receiving the trophy.
On the right: A rather youthful Kevin Yeomans, with Dave Gostelow behind him.

Friendly matches against South Birmingham started around 1984. Below is the match card of the 1986 match, a result in favour of Olton, which would be a rarity today. 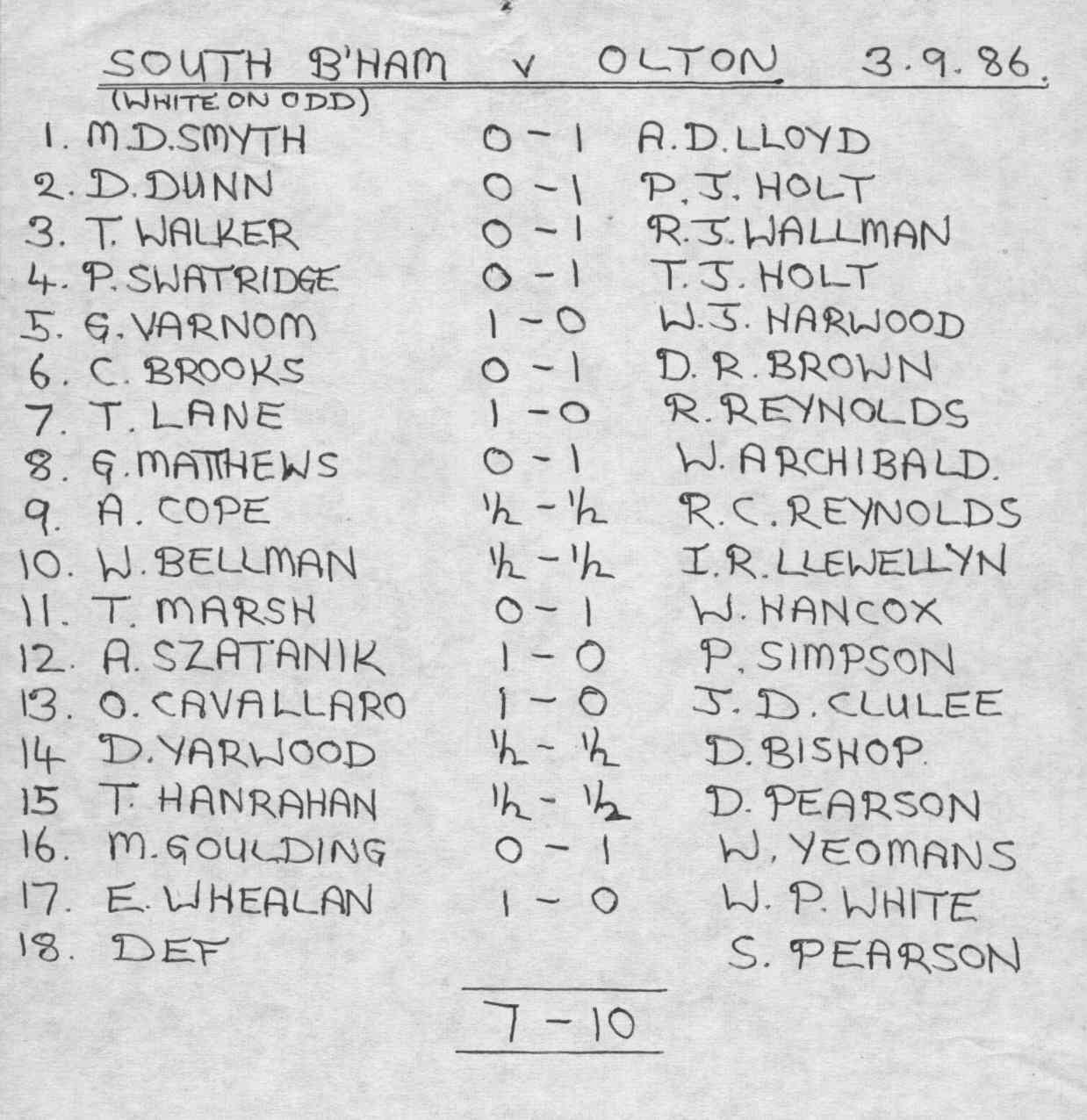 The Summer Tournament had been running for several years and was won by Martin Smyth of South Birmingham in 1985, 6 and 7. The Division 1 team finished 3rd in 1988, its highest achievement up to that point. Patrick Finglass competed in the World Junior championships in Paraguay. In 2001, he was to become the Captain of the runners-up in 'University Challenge'. Tony Russell shared the Division 6 Individual trophy. 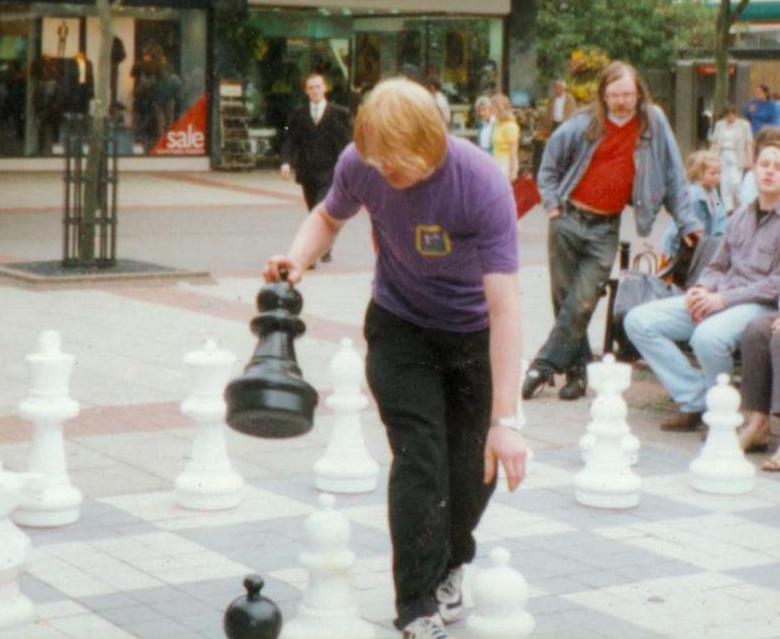 Bill Yeomans, who has played for the club for over 30 years, won on board 19 in the annual friendly match against South Birmingham to take the match 10½-9½, with seconds to go. The Finglass family won 4 titles at the Stafford junior congress.

BDCL divisions returned to 6 boards in 1993, resulting in 5 teams being entered. The club entered the Leamington League and won seven out of the next nine League Championships. The BDCL Lightning Tournament (above) was won five times and has been hosted by the club three times.

Division 2 were promoted at the end of the 93-4 season, and reached the Terrill Trophy semi-final. The club celebrated 50 years in 1995, with a 50 board match against South Birmingham. The National Club Intermediate plate was won in 1996 and the club moved to its current home, Tyseley Working Mens Club. The Barrington Plate was won by Division 6 in 1997.

The first team achieved second equal in Division 1 in the 1999-2000 season, narrowly missing out to South Birmingham. The 2001-02 season saw Olton teams in the top 3 Divisions. Alan Lloyd scored an impressive 26½/31 in all competitions of the Birmingham and Leamington Leagues, against very strong opponents. The Homer Trophy was won by Olton I in 2002. The Leamington League Open cup was shared for the third year in a row, this time with Nuneaton. Olton's top players retained their grip on the League Individual Lightning Trophy, Alan Lloyd taking the title from Phil Holt. Phil regained this though in 2003. Other successes saw Division 5 win the Barrington plate and Andy Cottom retain his Division 3 individual title. The 2004-5 season saw the Division 1 side win the Terrill Trophy, the first time the club has won this competition. This coincided with the Division 2 side winning the Championship and being promoted to Division 1. Andy Cottom again won the Division 3 individual, after losing out the previous year. The Leamington League cup and League Championship were both won. This feat was repeated in 2005-6 and the BDCL Division 4 side won the Homer Trophy in that season. From 2007 to 2009, there were a number of wins in the Leamington League, Open cup and Lightning championships. Birmingham League teams were now in Divisions 1, 2A/2B, 4 and 6. 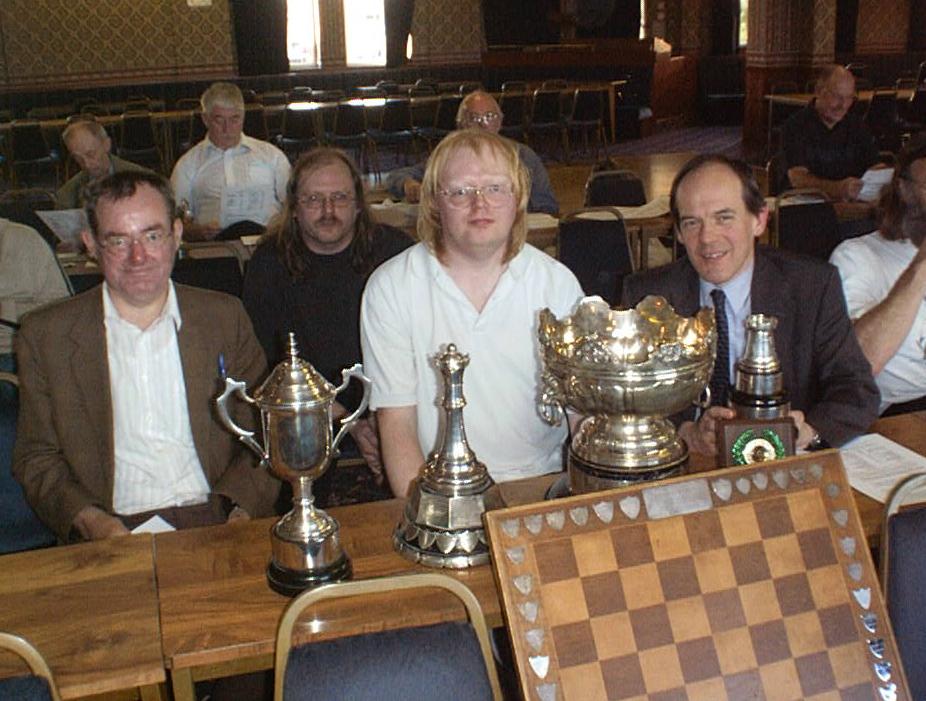 The 2010-11 season saw teams in Divisions 1,2,3,4 & 5 and the Leamington League/Open cup championships retained. John Llewelyn won the Division 4 individual trophy. In 2011-12, the LDCL title was lost on tie break, but the open cup was retained and Phil Holt again won the Lightning trophy. The Div.1 Birmingham League team were runners up in the Homer Plate and also finished second in the League after a play-off. Division 3 were relegated, as were Division 5. 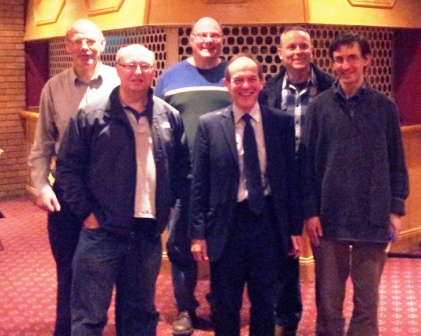 The 2012-13 season saw the introduction of the ECF Membership scheme. Birmingham League Division 4A went back up after finmishing Champions and also won the Townshend Trophy. The Leamington Division 1A side won the League Title and Open Cup Double. A team entered in Division 4 won the championship at the first attempt. Phil Hol again won the League Lightning Tournament. 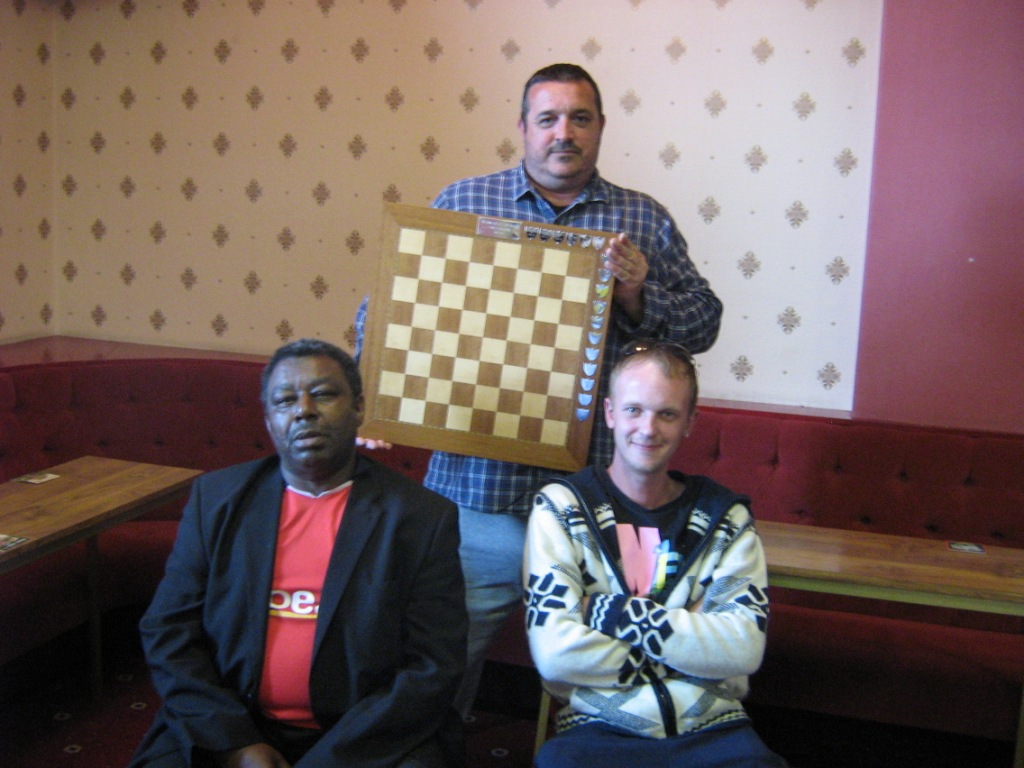